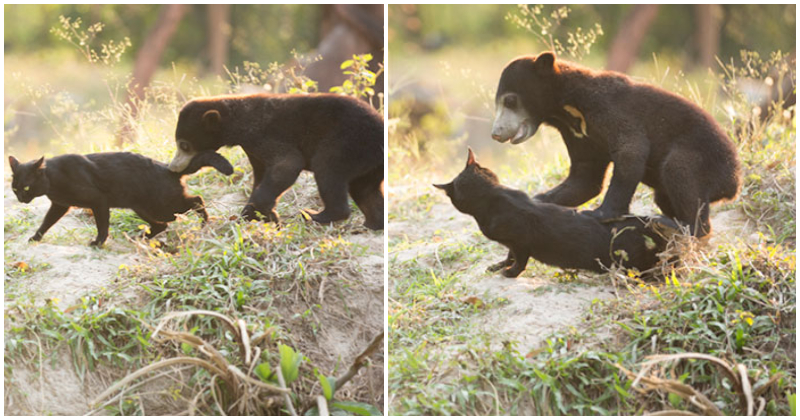 If you ask me what would be the purest and the most wonderful thing in the universe, I will say animal species friendship. It has the ability to overcome any odds. A fox becomes a dog’s closest buddy. A family of lions, tigers, and bears lives together. These friendships can help you cure your soul if you’re seeking for something to do so.

In today’s story, a beautiful bear cub and a cat form an unusual relationship. It’s bizarre, yet it happens at the Wildlife Friends Foundation Thailand (WFFT) rehabilitation center.

At the refuge, Ka Wao the young bear and George the cat are frequently seen playfully chasing each other. Before the cub came, George made friends with the mother bear. Now, both mother and daughter consider the playful cat to be a  friend.

“Before the cub came, George was buddies with the mother bear. They appear to get along swimmingly and spend a great deal of time together. They frequently sit down and eat as a group. WFFT’s Tom Taylor told Bored Panda, “I believe it’s nice for her to have another buddy to play with; she appears to like George’s playfulness.”

Ka Wao is a naughty and daring young lady. It’s simple to see why she enjoys spending time with George. They have a great time together. Ka Wao’s childhood was filled with laughter and happiness. Is it possible to get any better than this?

The beautiful youngster wasn’t intended to be born in the first place. To avoid the unwanted reproduction of wild animals in captivity, the group vasectomized her father Kaka.
Ka Wao, on the other hand, is a miracle. Her arrival confirmed that the surgery had failed.